There is a visible and common artifact in much of the data set period, due to a lack of coverage from geostationary satellites over an area centered on 70 degrees east longitude. This situation, commonly called the Indian Ocean gap, occurs for all of the July 1983 – June 1998 time period, except for April 1988 – March 1989, when data from the INSAT satellite is available to cover the gap. In July of 1998, Meteosat-5 was moved over the gap area, eliminating the gap.

When the Indian Ocean gap occurs, the gap area is covered by polar orbiting satellites, which can result in only one or two daytime overpasses per day. Geosynchronous temporal sampling during the daytime is 3-5 times per daytime depending upon the latitude (between 55 degrees North and South) and the time of year. 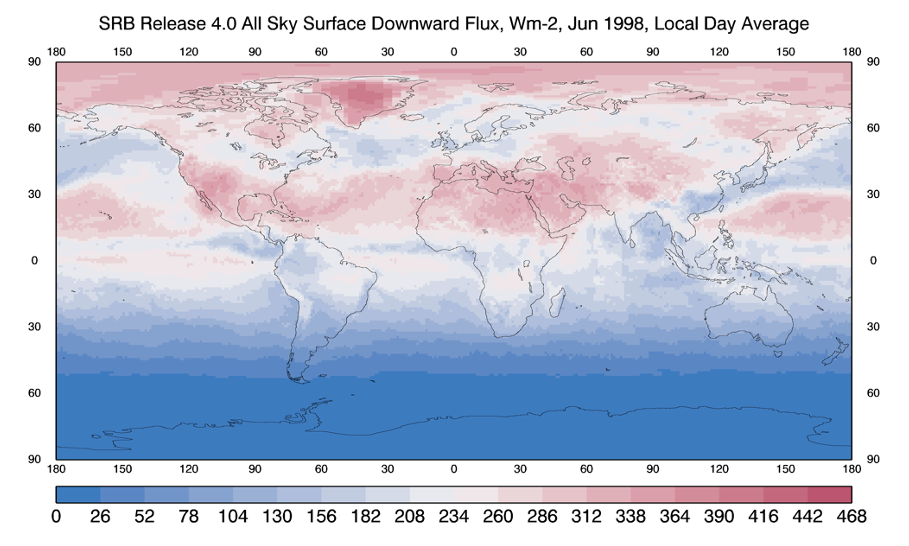 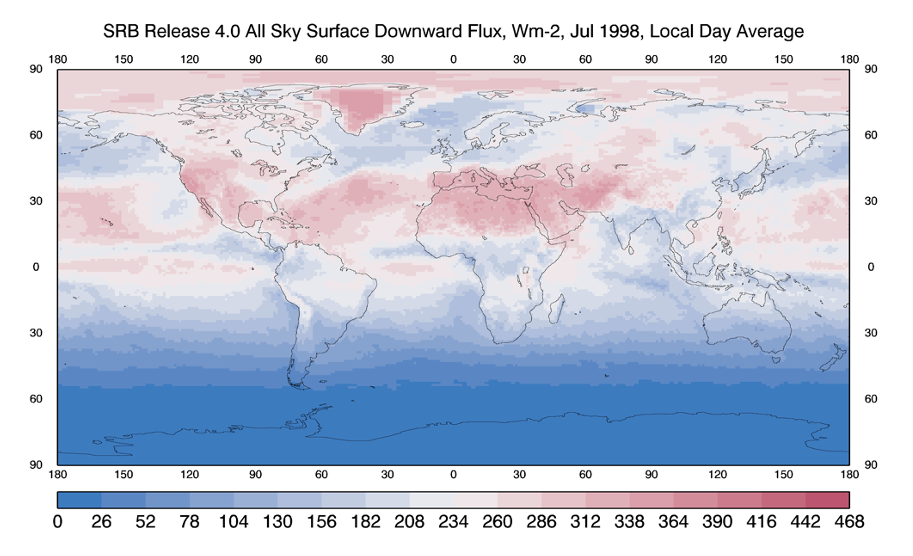 Once the gap was covered by geostationary satellites, the affect on the amount of filling in cloud properties and fluxes is noticeable. While the India gap isn’t the only contributing factor, it is obvious in the following picture that it is a major factor in the filling. Temporal variability of the SRB fluxes is expected to be higher prior to July 1998.

The SRB algorithms rely heavily on radiances and cloud properties from ISCCP. Great care is taken by the ISCCP team to produce a well-calibrated, homogeneous dataset from dozens of satellites over the course of several decades. However, there are a few known issues and discontinuities in the ISCCP products which are likely to be reflected in SRB products.

ISCCP uses a reference afternoon polar orbiter as a calibration standard for the other satellites (geostationary and polar orbiting) in the constellation. The afternoon orbiters are subject to orbital drift and are replaced every few years. The dates of transition from one reference satellite to the next are particular dates where small discontinuities in the SRB products are possible. The transition dates are as follows:

For the October 1994-January 1995 timeframe there was no reference orbiter available, so an interpolation between NOAA-11 and NOAA-14 is used. SRB results show noticeable anomalies in this period, some of which are likely artifacts of the calibration situation.

From NOAA-16 onward, the visible calibration is bi-linear, which has led to some changes from the previous linear calibrations. The 2001 transition to NOAA-16 is accompanied by fairly strong radiance increases over ice, which has led to polar values of SRB surface albedo and cloud optical thickness which are probably anomalously high, and surface downward fluxes which may be too low. The NOAA-18 calibration appears to be raising overall reported visible radiances, especially reducing the frequency of very low radiance scenes, such as clear skies over ocean near the day-night terminator. The effect on SRB products from 2006 onward has been mainly to cause a jump in surface albedo over much of the planet. Surface downward fluxes are less affected.

Care should be taken when computing long term time series from SRB data, with special notice taken of known transition dates, including those noted.