The NASA/GEWEX Surface Radiation Budget shortwave product (GSW) issued its Release 3.0 in 2011, covering the period from July 1983 through December 2007. (Stackhouse et al., 2011). The core of the code was based on the methodology described in Pinker and Laszlo (1992).

The spectral albedo of ocean has been changed in Rel. 4-IP. Rel. 3 used Briegleb (1986) for ocean albedo which varies direct reflectance with sun angle only. Rel. 4-IP has adopted the scheme of Jin et al. (2004) which incorporates wind speed, aerosol optical depth, and chlorophyll concentration. The new schema give a much lower ocean albedo at shallow sun angles. There is now spectral variation with a higher albedo at visible wavelengths and lower albedo in the near infrared.

Snow and ice spectral albedos have been changed, from the Warren and Wiscombe (1980) approach in Rel. 3, to Jin (1994). The Rel. 3 approach treated all snow and ice the same, whereas theRel. 4-IP approach differentiates snow (generally brighter) from ice (generally darker). 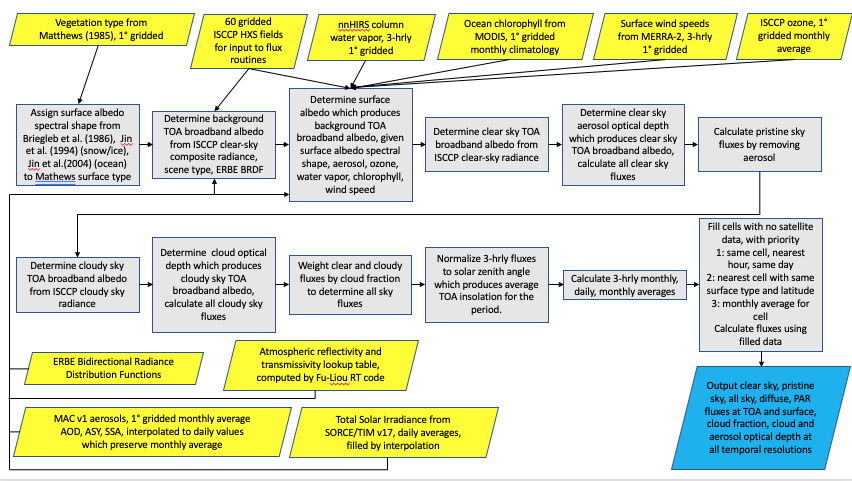 Like the shortwave algorithm, the NASA/GEWEX longwave algorithm (GLW) released its Rel. 3.1 in 2011. It was an improved version of the delta-two/four-stream combination approximation model outlined originally in Fu et al. (1997).

Rel. 4-IP is also using the Fu-Liou algorithm, but now is using the CERES LaRC Fu-Liou (Rose et al., 2013) which includes updates to cloud physics, gaseous constituents, and surface properties. Sensitivity tests were conducted from on the year 2007 between this version and that used for Rel. 3.1. These tests have shown that the surface pristine-sky (clear-sky for Rel. 3.1) surface downward flux has the largest algorithm change of +2.9Wm-2 for the global annual average. The Pristine OLR change is much smaller, at -0.36 Wm-2.

GLW uses cloud top information from ISCCP-H to map cloud vertical distribution onto temperature profiles. Cloud top pressure information for each pixel within a grid box is then used to identify the high, middle, or low layer in which the cloud resides in accordance with ISCCP definitions. All cloud layers can have both ice and water types based on a cloud top temperature threshold of less than 253 K for ice clouds consistent with ISCCP criterion. Cloud optical depths for daytime are available from ISCCP data but those for nighttime are inferred using the Fu et al. (1993; 1998) ice and water cloud parameterizations. Optical depths of like phase clouds within each layer are averaged logarithmically to conserve effective emission. Base pressures are assigned to cloud layers assuming constant pressure heights consistent with average thicknesses of these clouds (e.g., Dowling and Radke 1990). Clouds amounts of different types within each layer are added up to arrive at the cloud amount for the layer and cloud amounts of the three layers within a grid box are treated with random overlap for the purpose of computing radiative fluxes. Probabilities of occurrence are computed for each of the 20 physically possible configurations of the six ISCCP cloud types.